You have not signed in, your progress will not be monitored for certification purposes. Click here to sign in.

Post term. In 5-10% of women their pregnancies continue beyond 294 days (42 completed weeks) and are described as being post-term. Such pregnancies are at increased risk of birth trauma and asphyxia as well as stillbirth and postnatal death. It is generally accepted that pregnancies should not be allowed to go beyond 42 weeks and randomized studies demonstrated that induction of labor at 41 weeks compared to expectant management, is associated with a substantial reduction in perinatal mortality

Post dates refers to pregnancies beyond the estimated date of delivery. It should be realised that such pregnancies are also at increased risk of perinatal death. Indeed, the risk of pregnancy loss (intrauterine, neonatal and infant death) increases with gestation from as early as 38 weeks (1.2 per 1000 ongoing pregnancies at 38 weeks to 2.4 at 40 weeks and 5.8 at 43 weeks) 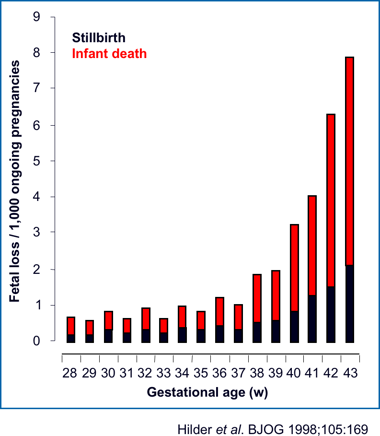